Istanbul – The San Francisco of the Orient

One of the cities on my bucket list was (and still is – even after my trip) Istanbul.

A few years ago I went with my cousin to the only city in the world that is located on two continents. 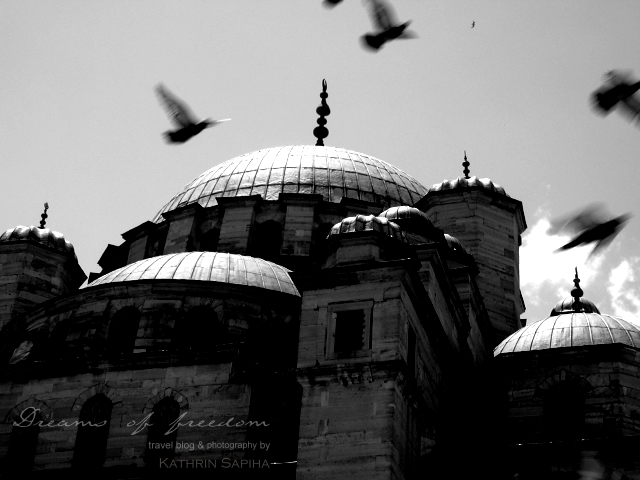 All across Europe to Istanbul

The arrival took a little bit longer than expected. Within a few hours we should have went from Berlin, Germany via Frankfurt to Istanbul. The first plane however had a technical error, which cost us several hours and trouble. Eventually we flew from Berlin to Frankfurt (were we missed our connecting flight), from there we went to Vienna – Munich and then Istanbul.

The trip was anything else but relaxing but I definitely prefer technical difficulties on the ground to those in the air. The taxi ride to the hotel at midnight was a different kind of hell ride but we survived this one as well.

After a few hours of sleep, everything looked better. We had the Hagia Sophia and the Blue Mosque right at our door steps. The perfect chance to start exploring the city. Istanbul is so full of culture and history, that it is impossible to see everything within one week. Make sure to find out what is important for you before your trip, so you don’t miss anything.

A few places that are a must is definitely the Hagia Sophia – a former Byzantine church, that was turned into a mosque and later became a museum –  and the Sultan-Ahmed-Mosque or “Blue Mosque”. Two landmarks that you actually cannot miss when visiting Istanbul. 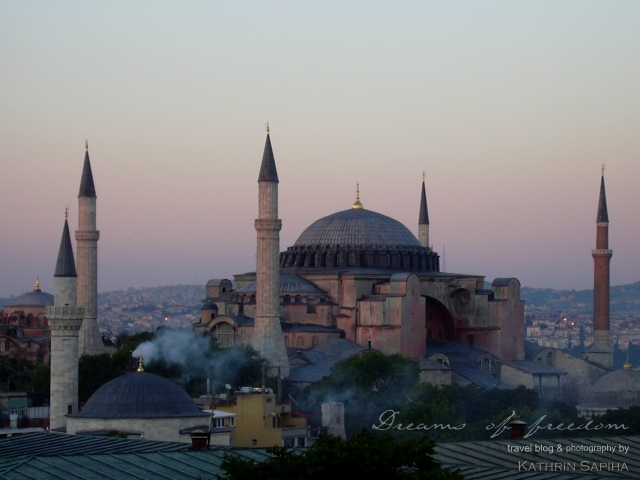 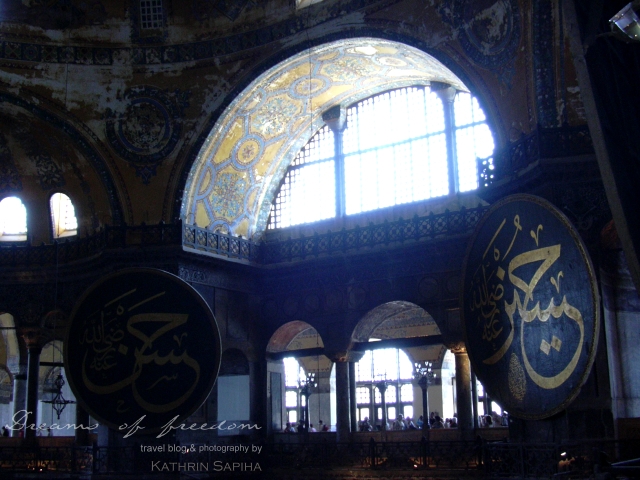 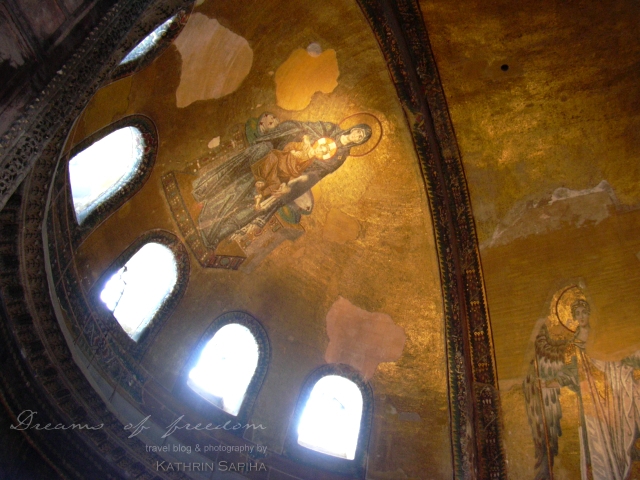 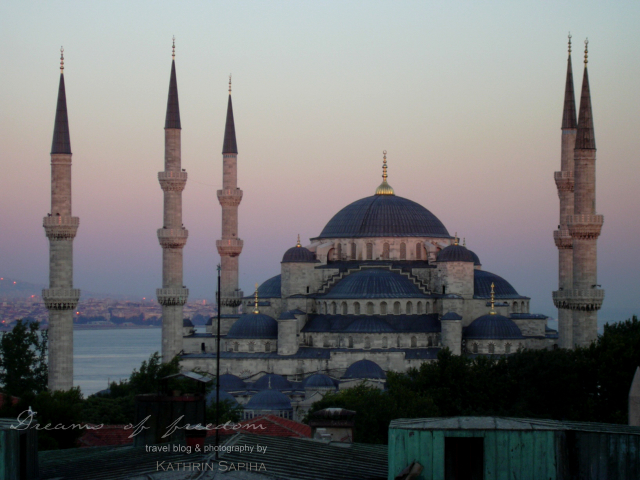 For very hot days I can recommend the Basilica Cistern (Yerebatan Sarayi), which once provided the Great Palace with drinking water and also is one of the scenes of Dan Brown’s book “Inferno“. There are more than 330 pillars in this 1500 years old water reservoir that take the visitors on a journey into the past. Underneath some of the columns there are stones shaped like the head of medusa as a base. Recycling is not an invention of the modern age. 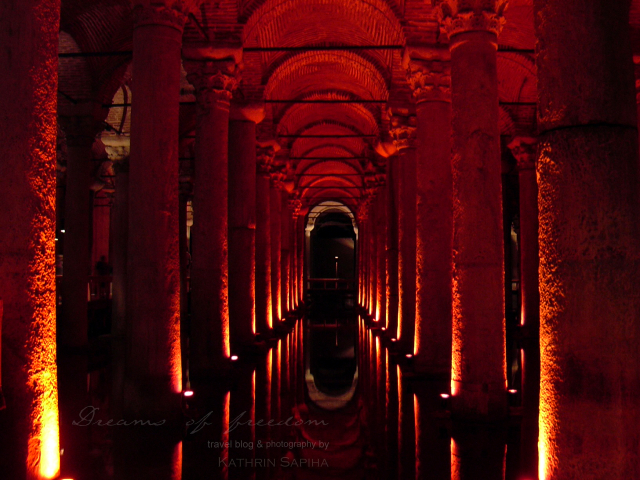 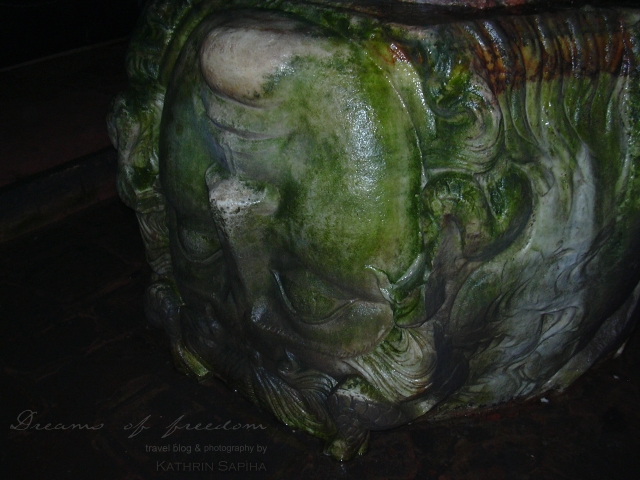 To enjoy the city in all it’s beauty, a climb onto the Galata Tower on one hand and a boat ride over the Bosporus on the other hand will be worth your while. We got to see Istanbul from a different side and in beautiful sunshine and we could not help but notice the similarity to San Francisco. Even today, after I got to visit San Francisco, my opinion still hasn’t changed. Not only the huge suspension bridges but also the amount of (actually interesting) sights, makes these cities to the two most beautiful cities in the world to me. 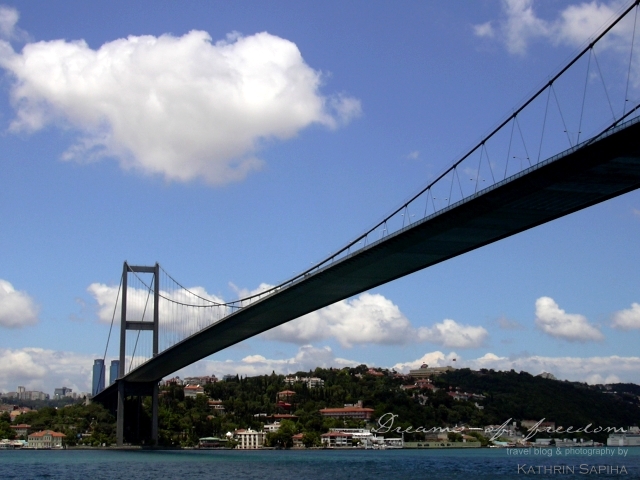 You can almost spend a whole day in the Topcapi Palace. We got there late and parts of it on the inside, such as the harem were closed already. 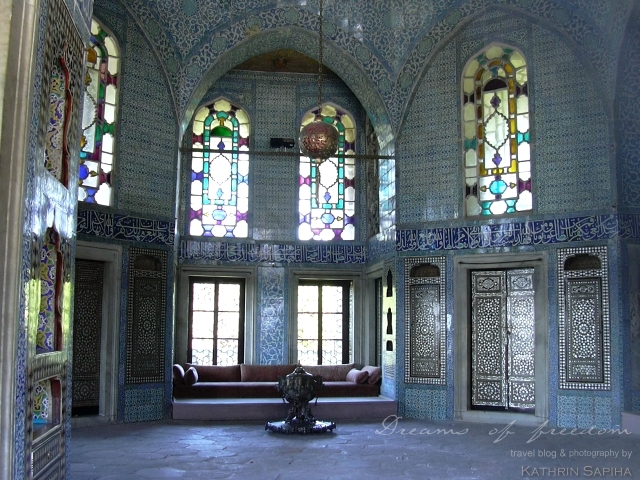 Room inside the Topcapi Palace

A personal highlight for me were the restaurants underneath the Galata Bridge. There is no way to let a day in Istanbul fade away more beautifully. Of course that is, if you don’t go party afterwards. The night life in Istanbul is supposed to be very nice as well. After a whole day of walking around I am more than happy to snuggle up to my hotel room pillow. 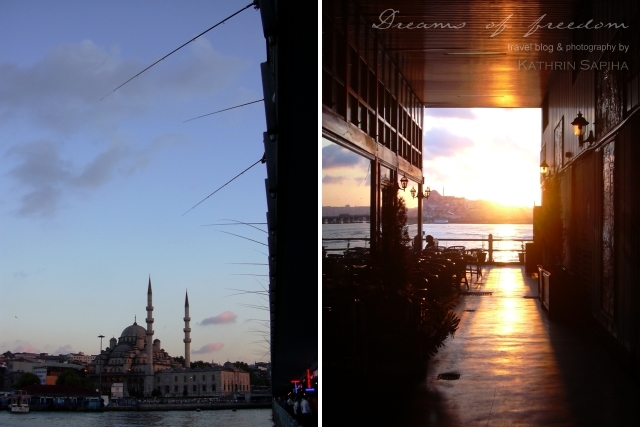 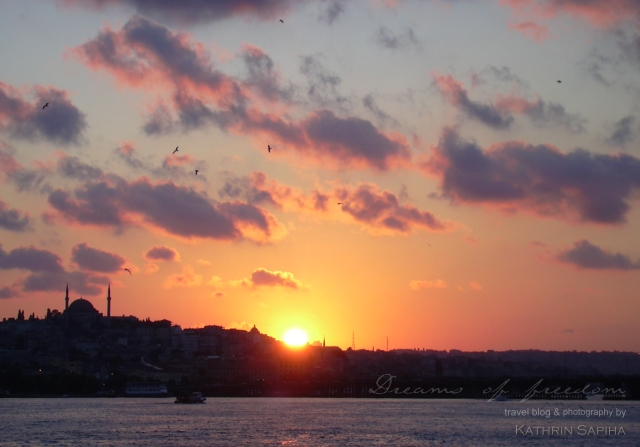 The search for one certain thing during this trip was not fruitful. During this week in Istanbul we tried a lot of “Döner” (that is a piece of flatbread with beef and lamb meat, fresh vegetables and a garlic- herb or hot sauce) – in english you may know it as “doner kebab” without the umlaut. I can tell you one thing: If you want a real “Döner”, you have to go to Berlin!

Have you ever been to Istanbul?

How did you experience the city? Have you been as impressed as I was and would you like to go back again? Even though I prefer the warmer temperatures, Istanbul is a beautiful destination throughout the whole year.

Leave me a comment! I am curious to read your Istanbul travel story! (And if they learned how to make a good “Döner” by now, leave me the directions!) 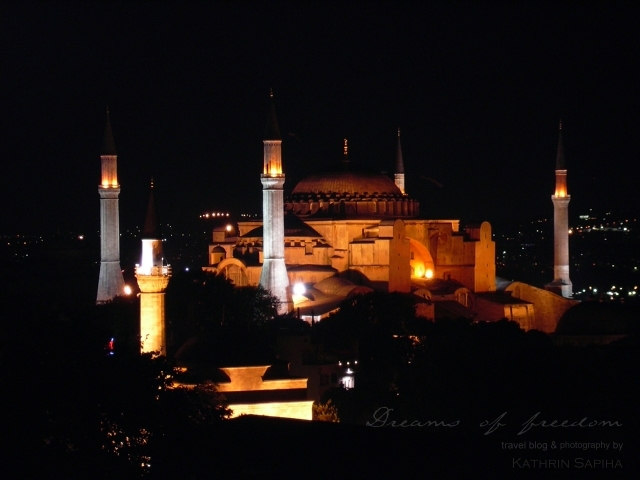 The Hagia Sophia by night 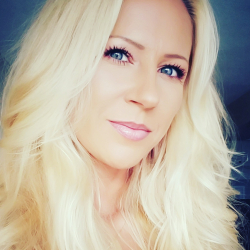 Zip-Lining through the South African jungle

Art is everywhere! Can you see it? Snap and win!

Hi from Istanbul:)) thank you for this amazing post. It was really nice for me to read about Istanbul like a tourist:) You did many things in Istanbul but of course there are many other things to do left;)
I am a passionate traveller too and I am blogging at http://www.mapkini.com and you can find me at facebook/instagram as @mapkini too. I know I should mention about Istanbul a lot in my blog…but reading about it from an eye of a Istanbul visitor is more exciting:)
Happy Travels,
Nilufer

Simply remarkable! Istanbul is on my bucket list too – one day, one day…

My favorite is Topcapi palace and especially the Harem part. Like to imagine how was the life in the past. But for my next visit to Istanbul Dolmabahce palace is must! :)

I have been to Istanbul and wrote about its street food in my travel blog, but I can’t say it is one of most beautiful cities in the world. It is an interesting city, but not unique, when there are Venice, Rome, or Bruges.

I loved Istanbul- and agree that its still on my list (we didn’t even get a chance to visit Hagia Sophia), the city was delightfully charming. Unfortunately I did not leave with a doner recipe either!

Been three times and will keep going back!

Had 2 fantastic trips to Istanbul, a great city with so much to see and do. Love to hear the call for prayer as you wander the streets. Recommend a day in Kadikoy over on the Asian side. Details in my blogs http://this-is-my-world123.blogspot.co.uk

Sorry to hear your travel there was less than flawless, but it looks like your time in Istanbul made up for it! Great photos–especially love that one of the bridge. I had planned a trip to Istanbul last year but it didn’t work out. Hopefully soon though!

Istanbul is easily one of my favourite cities – there was something about it that I just found absolutely fascinating. I can’t wait to return someday and explore it some more. I think its somewhere that I’ll love more the more times I visit!